Dr Bart Hoogenboom. Selective transport through polymer-coated nanopores: What we can learn from computational simulation and nanomechanical measurements 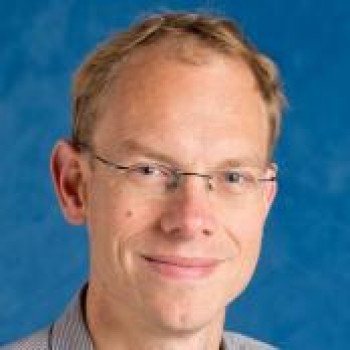 Nuclear pore complexes (NPCs) are the sole gates for transport between the cell nucleus and the cytoplasm. They contain a transport barrier that consists of unstructured nucleoporins anchored at a ring-structure spanning the nuclear envelope. We have modelled the NPC as a rather generic polymer-coated nanopore [1], to reproduce and test the wide range of proposed scenarios for explaining the transport selectivity through the NPC. Interestingly, variations in interpolymer interaction can cause the polymers to switch between a centrally-condensed state blocking the nanopore, and a wall-condensed state that leaves the nanopore open for transport. A marginally stable (central) condensate occurs for parameter settings that are consistent with experimental data on planar films of recombinant nucleoporins.
To experimentally assess the NPC, we have measured nanoscale stiffness topography cross-sections of intact NPCs [2], similar to and in quantitative agreement with cryo-electron tomography of the NPC. In particular, our data show the cytoplasmic ring structure as well as a central plug in its central channel. This central plug persists after reactivation of the transport cycle and resultant cargo release, indicating that it is structurally intrinsic to the transport barrier. The observed nanomechanical properties indicate the presence of a structurally heterogeneous and cohesive barrier to transport, and are quantitatively consistent with the computational predictions for a marginally stable nucleoporin condensate.
This suggests a transport scenario in which slight variations in interactions between nucleoporins induce them to adopt closed and open configurations. In addition, our biology-inspired work provides guidance for novel designs of artifical nanopore devices.